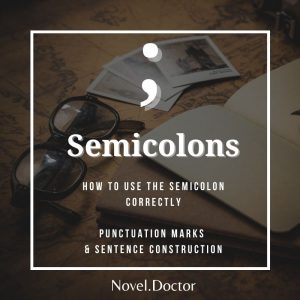 The semicolon is a unique punctuation mark with an interesting backstory and a fascinating history.

However, punctuation can be confusing. The critical question for most writers when they are trying to connect independent or semi-dependent sentence clauses is not the history or the historical usage. Instead, the question that is top of mind is simple: “when should I use the semicolon?”

As a writer, I like creating sentences that contain more than one — sometimes many multiple — clauses and sub-divided clauses (like this one) and clauses that contain an important bit of punctuation: a colon. Now, to be clear, the previous sentence contains several digressions; there are three different types of punctuation marks at work. However, the second sentence contains two closely related clauses or short sentences. To connect these two related ideas, a semicolon is used to knit them together.

The complicated paragraph (above) contains an example of how to use the semicolon (and several other marks). But before we get into the history and usage of the semicolon, let’s examine the other marks used in this paragraph.

How a Semicolon is Different from Em Dashes

In the “Quick Example” paragraph, you can see that a singular phrase—sometimes many multiple— is captured in the example and also here by em dashes on either side. A pair of em dashes can replace a pair of parentheses. Dashes are less formal than parentheses but they are also more intrusive. To draw attention to a phrase, use dashes. (Note that em dashes are usually typed on a computer keyboard with two hyphens (–), but when they are laid out topographically, they turn into the longer em dash (—). An em dash is a versatile punctuation mark that can be substituted for a comma, parentheses, or a colon. The usage depends on your intent.

How a Semicolon is Different from a Colon

The colon is often confused with a semicolon. So let’s briefly enumerate the differences.

Here is a brief list of all three ways you can correctly use a colon.

The colon (:) used to emphasize a phrase or single word at the end of a sentence. Note that an em dash can also be used for the same purpose. In the “Quick Example” paragraph, one sentence ends with a colon used for emphasis. This is the first of the three correct usages of a colon.

… contains an important bit of punctuation: a colon.

The most common usage of the colon is to introduce a list of objects or items.

We need the following things: a candle, a victim, and a magical book.

Note that you should not use a colon when all listed items are in the proper flow of the sentence.

The list of things we need include a candle, a victim, and a magical book.

This is the trickiest use of the colon, and the most similar to the semicolon’s proper usage. A colon can be used between two independent clauses, but only when the second clause explains or illustrates the first clause.

Here’s an example of the second sentence in the “Quick Example” paragraph rewritten to contain a colon instead of a semicolon. This is an example of a second clause explaining the first clause.

Now, to be clear, the previous sentence contains several digressions: it goes in several directions at once

When to use a semicolon

In contrast to the colon, the semicolon is more versatile. The semicolon can be used in four distinct cases. Here’s a brief summary, followed by examples of each case.

Four Proper Uses for the Semicolon

Here are the four cases in which you can use a semicolon:

Use Case 2: Between two independent clauses which are connected by a transitional phrase or conjunctive adverb

Use Case 3: Between items in a serial list which already contains commas

Use Case 4: In elliptical sentence constructions

The majority of uses of the semicolon occur between two closely-related independent clauses (Use Case 1) To be entirely clear, often the two clauses on either side of the semicolon could be sentences in their own right.

The first three ways of using the semicolon are variations on this basic usage model. In short, the semicolon does not bring a full end to a sentence like a period, and it is not a momentary pause, like a comma. Instead, the semicolon exists as a punctuated “bridge,” to indicate that two short sentences are part of the same concept.

Here are some examples of each use case, illustrated with sentences about magical objects.

The hand of glory was a terrifying thing; that magical object may have been his most horrible creation.

The two statements here could have easily stood on their own as independent sentences. But the use of a semicolon indicates a certain closeness between the two ideas. The semicolon marries these two concepts.

2. Between two independent clauses which are connected by a transitional phrase or conjunctive adverb

The hand of glory was a terrifying thing; in point of fact, that magical object may have been his most horrible creation.

The transitional phrase “in point of fact” was added to the second sentence, but these two clauses can still be joined by a semicolon.

3. Between items in a list which already contains commas

She created, crafted, organized, and deployed many magical objects; flying objects like carpets, brooms and cars, as well as a staff of power and a hand of glory.

This complicated sentence includes two clauses, both with internal commas. In this instance, a semicolon is used to make the list items more distinct.

One might say that the semicolon becomes “super-comma” in this instance.

By the time she had completed half the incantation of power, she had conquered her kingdom; when she was done, she owned the magical universe.

When the semicolon is combined with a comma, it can be used in a sentence form called an “elliptical construction.” This is a sentence in which previous activity can be inferred from context. In this example sentence, we can infer that she is still doing an “incantation of power” in the second clause. The comma infers this context (serving as an ellipsis), which means you don’t have to repeat that information.

Many writers don’t use a semicolon correctly. Instead, they often use a comma in its place, creating a mutated sentence joined by a “comma splice.”

Here are some helpful examples that demonstrate correct and incorrect sentence construction.

INCORRECT (comma splice): The hand of glory was terrible, it was magically powerful beyond any comprehension.

CORRECT: The hand of glory was terrible; it was magically powerful beyond any comprehension.

INCORRECT (comma splice): The hand of glory is terrible and puissant, kingdoms may well succumb to its power.

CORRECT: The hand of glory is terrible and puissant; kingdoms may well succumb to its power.

The second clause is dependent on the first, which means a semicolon provides exactly the right amount of pause between the two ideas.

History of the semicolon

You’re probably wondering about the history I mentioned at the beginning. In fact, there has been a whole book written on this vaunted punctuation mark. 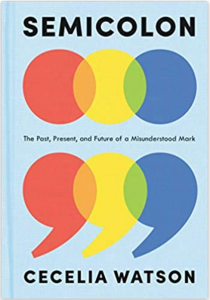 Cecelia Watson, author of Semicolon: The Past, Present, and Future of a Misunderstood Mark writes “The semicolon is a place where our anxieties and our aspirations about language, class and education are concentrated. In this small mark big ideas are distilled down to a few winking drops of ink.”

It turns out that the modern semicolon was invented in Venice, in 1494, by the printer and publisher Aldus Manutius. Yet for much of history, this mark had no strictly defined function. The semicolon acted like a musical notation, allowing for a pause somewhere between the beat of a comma and a colon. This explains why it has such a mongrel design. Much later in literary history, the semicolon’s usages were systematized.

Duels have been fought over the semicolon and ambiguous usage has led to a determination of war crimes. In the first instance, two University of Paris law professors clashed in 1837 over a question of semicolon usage. They settled this serious punctuation matter with a duel. And in 1945, an errant semicolon that found its way into the definition of war crimes in the Charter of the International Military Tribunal temporarily halted the prosecution of captured Nazi war criminals until the ambiguous sentence was clarified and the usage removed.

There’s much more in the book. Here’s an excerpt from the New York Times review of this interesting book:

Semicolons are not your workaday periods and commas. They belong to the family of trills and volutes; they exist for the sake of complexity, beauty, subtle connections. Cardinal virtues, I’d say, but Watson traces the warring (and gendered) camps of prose style — a fixation on clarity and directness versus a curled sensibility, one interested in the fertile territories of ambiguity.

Watson covers impressive ground in this short book, skittering back and forth like a sandpiper at the shores of language’s Great Debates. There are fascinating forays into how grammarians “created a market for their rules,” the strange history of diagramming sentences and the racial politics of so-called standard English.

➤ How Many Words Do Famous Writers write Every Day?

➤ How to Deliver a Book to an Editor: How To Format Your Manuscript