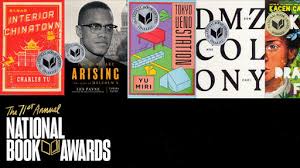 The past week was an exciting moment in the world of books and publishing. For the first time, the National Book Awards were held entirely virtually (here’s where you can watch the ceremony). And here’s an overview of some important moments.

Congratulations to all the National Book Award winners!

Nonfiction: The Dead Are Arising: The Life of Malcolm X by Tamara Payne and Les Payne

Young People’s Literature: King and the Dragonflies by Kacen Callender

Walter Mosely was also honored at the National Book Awards with the annual Medal for Distinguished Contribution to American Letters.