Metaphors are everywhere! To help you understand this rhetorical device, here’s a big list of 125+ metaphor examples  (plus tips for writers). But first, let’s talk about the engine of storytelling that make metaphors work. 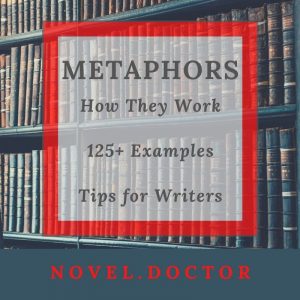 We weave a web of words and live inside it, and call it world. That’s what human beings do. The connected threads of that great web of story are built of strands we call metaphor.

What is a metaphor?

A metaphor compares two dissimilar things by equating one thing as the other thing. By this comparison, our minds can bring one idea into the conceptual space of another idea. When you compare two objects, one of them is seen in a different light, illuminated and re-configured through that comparison.

The concrete becomes abstract, the ephemeral grounded momentarily, the unknown related to the known in a way that helps us understand. This tendency to compare two unlike things is a very human activity.

In fact, our brains are designed to think in metaphorical constructs. George Lakoff explains that “One of the fundamental findings of cognitive science is that people think in terms of frames and metaphors […] The frames are in the synapses of our brains, physically present in the form of neural circuitry. When the facts don’t fit the frames, the frames are kept and the facts ignored.” We see things differently when we look through the lens of metaphor.

Our minds weave ideas together continuously so that we can better understand events, objects, and even people and their motivations. Metaphors are not literal at all — in fact, they are intentionally told as figurative retellings of the world, laying a fabric of imaginative story over raw reality and transforming that reality into a mini-story.

Before we get to the big list of metaphor examples, it’s useful to know there are different ways of writing metaphors.

Metaphor is the big idea behind the comparison between two different objects. However, in English, we use two different words to describe different instances of the rhetorical device known as a metaphor.

A metaphor proper compares two things by simply stating that this thing is that thing. A = B.

Examples of basic metaphors include:

A simile is a metaphor that uses the words like or as to make the same sort of metaphorical comparison.

Examples of similes in action include:

Metaphors can bring the joy of storytelling into every sentence that you create and can propel your readers forward through your story. To provide you with a navigational map through the sea of metaphors, I’ve listed 125 metaphor examples at work. But before we get to the big list, let’s see what famous writers have said about the power of metaphor.

The British novelist Mary Anne Evans (who published as George Eliot) wrote about how metaphor compels us to act: “For we all of us, grave or light, get our thoughts entangled in metaphors, and act fatally on the strength of them.”

The Czech writer Milan Kundera agreed with Eliot. He wrote: “Metaphors are dangerous. Metaphors are not to be trifled with.” Yet despite this danger, novelists need to use metaphor to communicate deeper truths.

The hilarious Terry Pratchett sums up the idea in one of his novels: “A metaphor is a kind o’ lie to help people understand what’s true.”

Pratchett was on the right path. Because as one of the authors of the entire modern way of thinking about logic and storytelling told us, achieving master in metaphor is the height of storytelling. Aristotle said: “The greatest thing by far is to be a master of metaphor; it is the one thing that cannot be learnt from others; and it is also a sign of genius, since a good metaphor implies an intuitive perception of the similarity in the dissimilar.”

The inimitable Ray Bradbury described his writing this way: “I speak in tongues. I write metaphors. Every one of my stories is a metaphor you can remember. The great religions are all metaphor. We appreciate things like Daniel and the lion’s den, and the Tower of Babel. People remember these metaphors because they are so vivid.”

Finally, the Italian novelist and critic Umberto Eco explained the device precisely: “Metaphors set up not only similarities but also oppositions. A cup and a shield are alike in their form (round and concave), but opposite in their function (peace vs. war), just as Ares and Dionysus are alike insofar as they are gods, but opposite with regard to the ends they pursue and to the instruments they use.”

Metaphors make us human and bring us into a story. They serve as guideposts on the storytelling path and help us navigate our experience. The wonderful novelist Haruki Murakami tells us that we should not try to explain them, but instead embrace the idea. Murakami writes: “Allegories and metaphors are not something you should explain in words. You just grasp them and accept them.”

In the big list of metaphor examples below, you’ll find metaphors from many writers in many genres of literature.

Browse freely — skip around! Enjoy swimming in the sea of metaphor!

Human beings naturally think in metaphor. So you probably use metaphorical ideas in conversation every day. Metaphorical expressions populate the English language with verve and insight. Here are a few everyday expressions that are, in fact, metaphors.

Human beings invented storytelling when our communication was an oral culture. Stories we told around the fire, or sung by storytellers who memorized by listening to other storytellers. In fact, early writers such as Socrates and Plato argued about the relative merits of writing stories down instead of telling or singing them! Today, storytellers continue to use song to entrance us — and every lyricist uses metaphors.

Metaphor is used extensively in the literary arts.  In fact, much of the formalist movement in literary criticism focused on analyzing the effects and the implications of metaphor in literature.

Writers therefore often think in metaphors. This is the common mode of expression of great writers. Here are examples from several of our greatest literary thinkers.

Poetry is often constructed of extended metaphor. This is a technique that takes a single comparative idea and explores how that idea works in a longer work of poetry. In earlier times, this extended metaphorical device was also known as a conceit. Here are some examples from poetic history.

Let’s start with a famous yet complete poem that contains several metaphors throughout:

And in this poem, Syliva Plath describes her pregnancy:

Metaphors in the Bible

One of the earliest written collections of a culture’s literature is today known as the Bible. The Bible is actually a collection of many shorter works, which were later compiled into one volume. The Bible contains many examples of literary technique, among them many instances of metaphorical language.

Now that you have some grounding in the historical use of metaphor in song, poetry and literature, here are some additional examples from writers through the centuries.

And just for fun…. here’s one last metaphor to wrap up the list!

How to Use Metaphors in Writing —  3 Essential Tips

Writers are naturally drawn to metaphor, as this is one of the key tools in the writing toolbox. Here are a few tips to help you use metaphors effectively.

Part of the reason that lists like the ones above exist is that most writers know about these comparisons. If you wish to be original, then you would do well to avoid re-using common metaphors that famous writers like William Shakespeare, George Eliot, and Toni Morrison have already used.

Using clichés in your writing will bore your readers and lead them to find more original, inspired writers to read. Here’s one helpful list of clichés you’ll want to avoid in your writing.

A metaphor compares two dissimilar things. While these things should on the surface be very different, they must share some sort of detectable common attributes. Don’t compare two things that just can’t be compared. The metaphor should make some sort of logical sense to the reader.

For example, if you wanted to use a metaphor to describe the rhythmic sound of a drum, it would make sense to compare this to another thing with a rhythmic motion, such as a heartbeat or waves. But it would not make sense to compare a drumbeat to oil sitting in a pan, or a still pool of water. The connection has to exist for you to use it in your work.

Make your metaphors easy to understand so a reader can quickly grasp your point.

3. Avoid Purple Prose with too many metaphors

It is possible to over-use metaphors. Storytelling that launches into metaphorical descriptions without a good grounding in plot and the basics of character description turns into “purple prose” — writing that is full of colorful images but without a sense of momentum or purpose.

Your writing slows down when you use too many metaphors or use them in the wrong way. If you over-use the metaphorical toolset, you risk boring your reader.

Furthermore, if you use too many metaphors, this actually lessens the impact of each metaphor, since they’ll all start to blend together and each one will become less memorable on its own.

If your prose seems over-loaded with metaphors, try to strip down the description to the bare bones, and only use a metaphor that helps us to experience the scene in a new light. If the bare bones description works without a metaphor, it’s always wise to leave it out.

Less is more in the use of metaphors!

➤ What Kind of Writer are You? Pantsers VS Plotters

➤ How Many Words Do Famous Writers Write Every Day?

➤ How to Deliver a Book to an Editor: Formatting Your Manuscript